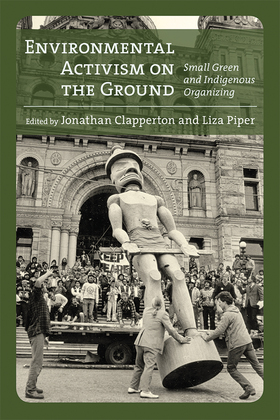 Environmental Activism on the Ground

Environmental Activism on the Ground draws upon a wide range of interdisciplinary scholarship to examine small scale, local environmental activism, paying particular attention to Indigenous experiences. It illuminates the questions that are central to the ongoing evolution of the environmental movement while reappraising the history and character of late twentieth and early twenty-first environmentalism in Canada, the United States, and beyond.

This collection considers the different ways in which Indigenous and non-Indigenous activists have worked to achieve significant change. It examines attempts to resist exploitative and damaging resource developments, and the establishment of parks, heritage sites, and protected areas that recognize the indivisibility of cultural and natural resources. It pays special attention to the thriving environmentalism of the 1960s through the 1980s, an era which saw the rise of major organizations such as Greenpeace along with the flourishing of local and community-based environmental activism.

Environmental Activism on the Ground emphasizes the effects of local and Indigenous activism, offering lessons and directions from the ground up. It demonstrates that the modern environmental movement has been as much a small-scale, ordinary activity as a large-scale, elite one.