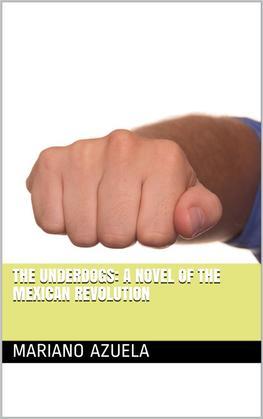 The Underdogs: A Novel of the Mexican Revolution

The Underdogs (Spanish: Los de Abajo) is a novel by Mexican author Mariano Azuela which tells the story of a group of commoners who are dragged into the Mexican Revolution and the changes in their psyche due to living through the conflict. It is heavily influenced by the author's experiences during the revolution, where he participated as a medical officer for Pancho Villa's Northern Division. The novel was the first of its kind to be translated into English, as part of a project sponsored by the Mexican Government and the Mexican Renaissance intellectual movement to promote Mexico as a literature-creating country. It had been previously well received by American critics like Earl K.James from the New York Times in 1928 so the translation project went on and was released in 1929 by Brentanno's Books, at the time, the largest bookstore chain in the US. It has been considered "The Novel of the Mexican Revolution" since 1924 when journalist Francisco Monterde wrote about it for the Excélsior as an example of virile and modern post-revolutionary literature.

The book tells us the story of Demetrio Macías, a peasant who after having an misunderstanding with a local cacique (land owner) is hunted by the government soldiers (Federales) and decides to flee when they arrive at his home and kill his dog Palomo (dove), prompting him to abandon his family and take revenge. He escapes to the mountains and forms a group of rebels who support the Mexican Revolution.

The whole novel has various reading levels and the character names represent forces or ideals beyond the characters themselves. Some of them are prototypes of the kind of people that was dragged into the revolution, like Demetrio, whose name is associated with the goddess of farming and agriculture Demeter; the dog, Palomo, killed at the beginning who symbolizes peace. Others are archetypes, like Luis Cervantes, who is an educated man mistreated by the Federales and therefore turning on them, or Güero Margarito, a cruel man who finds justification for his deeds in the turbulence of the times. We can also find La Pintada (translated as War paint) a tough woman, as opposed to Camila, a teenager peasant who is dragged into the conflict by means of subterfuge to become Macías' lover. With a concise, unsympathetic tone, Azuela takes us along with this band of outcasts as they move along the hills of the country, seemingly struggling for a cause whose leader changes from day to night. The rebels, not very certain of what or whom they are fighting for, practice the abuse and injustice they used to suffer in the hands of the old leaders. So the Mexican people, as the title of the book hints, are always the “ones below”, no matter who runs the country.