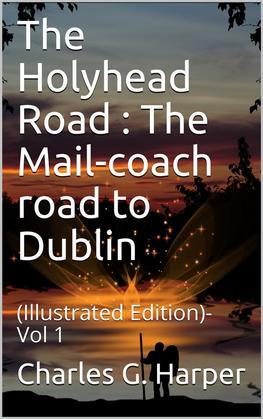 The Holyhead Road Vol 1 / The Mail-coach road to Dublin

“The olden days of travelling, now to return no more, in which distance could not be vanquished without toil”—those are the days mourned by Ruskin, who had little better acquaintance with them than afforded by his childish journeys, when his father, a prosperous wine-merchant, travelled the country in a carriage with a certain degree of style. Regrets are, under such circumstances, easily to be understood, just as were those of the old coach-proprietors, innkeepers, coachmen, postboys, and all who depended upon road-travel for their existence; but few among travellers who lived in the days when the change was made from road to rail had feelings of that kind, else railways would not have proved so immediately successful. It has been left for a later era to discover the charm and rosy glamour of old road-faring days, a charm not greatly insisted upon in the literature of those times, which, instead of being rich in praise of the road, is fruitful in accounts of the miseries of travel. Pepys, on the Portsmouth Road in 1668, fearful of losing his way at night, as had often happened to him before; Thoresby, in 1714 and later years, on the Great North Road, thanking God that he had reached home safely; Horace Walpole, on the Brighton Road in 1749, finding the roads almost impassable, therefore, and reasonably enough, “a great damper of curiosity”; Arthur Young for years exhausting the vocabulary of abuse on roads in general; and Jeffrey in 1831, at Grantham, looking dismally forward to being snowed up at Alconbury Hill—these are a few instances, among many, which go to prove, if proof were necessary, that travelling was regarded then as a wholly unmitigated evil.

But, quite apart from such considerations, there is a charm clinging about the bygone and the out-of-date wholly lacking in things contemporary. The Romans who constructed and travelled along their roads could not find in them the interest we discover, and the old posting-houses and inns frequented by our grandfathers must have seemed to them as matter-of-fact as we now think our own railway hotels. It is, indeed, just BECAUSE the old roads and the wayside inns are superseded by the rail and the modern hotel, and because they are altogether removed from the everyday vulgarity of use and competition, that they have assumed their romantic aspect, together with that which now surrounds the slow and inconvenient coaches and the harmful unnecessary highwayman, long since become genuine antiques and puppets for the historical novelist to play with.

The Holyhead Road, in its long course towards the Irish Sea, holds much of this old romance, and not a little of a newer sort. Cities whose history goes back to the era of the Saxons who first gave this highway the name of “Watling Street,” lie along these many miles; and other cities and towns there are whose fame and fortunes are of entirely modern growth. Some have decayed, more have sprung into vigorous life, and, in answer to the demand that arose, a hundred years ago, for improved roads, the old highway itself was remodelled, in the days that are already become distant.