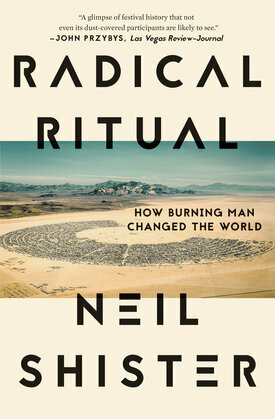 This captivating history of the Burning Man festival and its promise for America's future proposes that what Florence was to the Renaissance, Black Rock City is to an unfolding cultural epoch that remains to be named.

Shister is not alone in his opinion. Led by conservative activist Grover Norquist, the Cato Institute recently held an event on what libertarians can learn from Burning Man. The festival intertwines conservative and progressive ideas. On one hand it is a celebration of self-reliance, personal accountability, and individual freedom; on the other hand it is based on strong values of inclusion, consensual decision-making, and centered, collaborative endeavor.

In a wonderful mix of narrative storytelling and reportage, Radical Ritual discusses how Burning Man has impacted the art world, disaster relief, urban renewal, the utilization of renewable energy and even the corporate governance of Google. The story concludes with the sudden death in May, 2018 of Larry Harvey, now renowned as the philosophical epicenter of the movement.