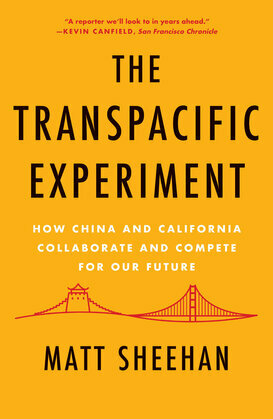 A timely, contemporary examination of The Pacific Rim that offers a vital account of California’s unique relationship with China through the exploits of the entrepreneurs, activists, and politicians driving transformations with international implications.

Tensions between the world’s superpowers are mounting in Washington D.C. and Beijing. But between these hubs of high-level politics, an entirely new reality is emerging. China and the state of California maintain robust socio-economic exchanges and interdependencies that reverberate across the globe, and these interactions make California a microcosm of the most important international relationship of the 21st century.

With affability and keen insight, journalist Matt Sheehan—The Huffington Post’s first China correspondent whose writing about China and California has appeared in Vice News, Foreign Policy, and The Atlantic—chronicles the real people who are making these transpacific connections. This book tells the story of a small-town Southern Californian mayor who believes a Chinese electric bus factory will save his town from meth labs and skinheads. It follows a star Chinese artificial intelligence researcher who leaves Google to create a Chinese startup that will challenge his former employer from behind the Great Firewall.

Explored through Sheehan’s on-the-ground reporting, these narratives move from movie sets in the “Hollywood of China” to San Francisco housing projects, to Beijing startup incubators. Each of these stories lays bare the new reality of 21st-century superpower: the closer these countries get to one another, the more personal the frictions become.