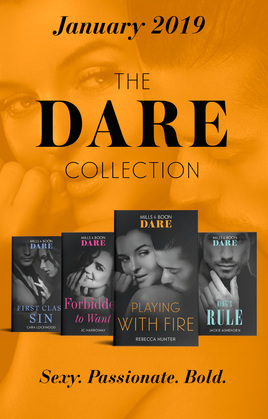 Reformed conman Xander King and his stepsister Poppy both sense the electric chemistry between them. So when they start working together, it's not long before meetings in the boardroom become steamy trysts in the bedroom! But Xander's hiding a secret about the death of Poppy's father and the guilt is tearing him apart. Will Xander's dark past ruin it all, or is their red-hot passion fierce enough to redeem this King?

Forbidden to Want by JC Harroway
Mia Abbott never backs down from a challenge—especially one posed by sexy widowed billionaire, Kit Faulkner. He's dark, dangerous, damaged—and pure, raw sex appeal. And for the next three weeks, he's also Mia's boss. The rules of their wicked engagement? No romance. Only, one night together isn't enough. They're about to discover that the most forbidden things are also the hardest to give up…

Playing with Fire by Rebecca Hunter
Marianna Ruiz never thought she'd see Simon Rodriguez again—or that hiring him to unearth some suspicious dealings at her father’s company would lead to one seriously hot hook-up. At first, it was just supposed to be some naughty revenge sex. But behind closed doors, Marianna and Simon have one last chance to finish what they started eleven years ago..

First Class Sin by Cara Lockwood
Juliana craves intimacy in her lonely job as an airline consultant, and mysterious businessman Law seems the perfect remedy. After a lust-filled encounter at 30,000 feet, their fling well and truly takes off. She soon discovers Law owns the airline she’s been hired to assess—and he’s fallen for her. Juliana wants passion, not commitment…but could this dashing stranger be more than a flight of fantasy?