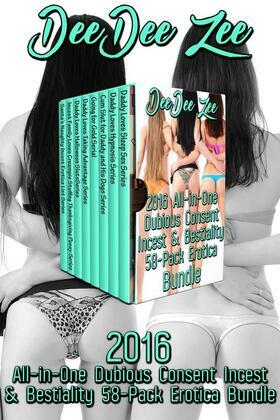 Every DeeDee Zee title released in 2016 collected into a single bundle. That’s 58 titles in one go! Father-daughter, mother-daughter, father-son, mother-son, brother-sister, sister-sister, uncle-niece, grandpa-granddaughter, and even the family dogs get in on the action.

12 fathers with sleeping daughters and an incestuous need to discover how good they are in the sack.

Twelve dads have hypnotized their thirteen daughters into believing Daddy’s baby is the one thing they want more than anything else.

Four mind-controlled daughters are competing in a sexual version of the summer games while the internet pays to watch.

These fathers see an opportunity for sex with their daughters, and they don’t let it pass them by.

4 families that are definitely on Santa’s Naughty List, but that just means they’ll be enjoying their Christmas to the fullest.