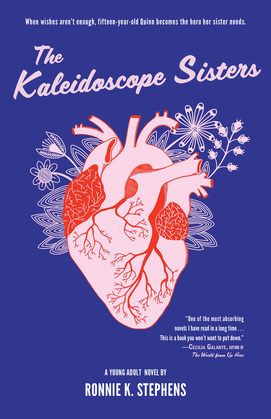 The Kaleidoscope Sisters is a debut novel hinging on the indomitable spirit of young women. It centers on fifteen-year-old Quinn and her younger sister, Riley, who is dying from a degenerative heart defect. As the novel opens, Riley is weeks away from her seventh birthday, and her decline is obvious. Years in and out of hospitals have left the family with no support system, but Quinn is determined to save her younger sister. In her quest, Quinn discovers a portal to another realm peppered with characters based in history, all of whom disappeared mysteriously. Aiding Quinn throughout her journey in the Other Realm is Meelie. Quinn learns that a new heart for Riley can be harvested in the Other Realm, but not without sacrifice. While Meelie helps Quinn come to terms with an impossible decision, Quinn uncovers the truth about Meelie’s disappearance and why she never returned home. The book chronicles Quinn’s journey, focusing on the inevitability of loss and the realization that no matter what Quinn decides, her mother must lose one of her daughters.

The Kaleidoscope Sisters is the second release in the Oddities Kaylie Jones Books series, an e-first line that focuses on unconventional, edgy, risk-taking novels that boldly defy the traditional forms and conventions of the literary novel, with a focus on YA, horror, and mystery.