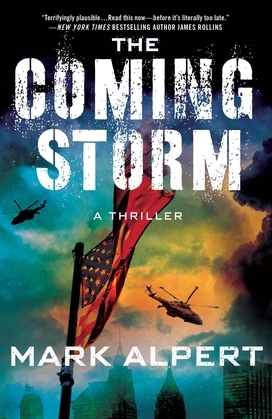 "This novel isn't just ripped from the headlines, it's an alarm bell ringing from the near-future, a prescient warning of where we're headed next. Read this now--before it's literally too late." - New York Times bestselling author James Rollins

America is on the brink of collapse, devastated by a brutal government trying to silence its citizens, in The Coming Storm, the next action-packed thriller from Mark Alpert.

New York City, 2023: Rising seas and superstorms have ravaged the land. Food and electricity are scarce. A dangerous Washington regime has terrorized the city, forcing the most vulnerable and defenseless people into the flood-ravaged neighborhoods. The new laws are enforced by an army of genetically enhanced soldiers, designed to be the fiercest and cruelest of killers. Genetic scientist Dr. Jenna Khan knows too much about how these super-soldiers were engineered: by altering the DNA sequence in ways that could change the fabric of humanity.

Escaping arrest and on the run, Jenna joins forces with a genetically enhanced soldier gone rogue and a Brooklyn gang kingpin to resist the government?s plan to manipulate the DNA of all Americans. The race is on to stop the evil experiment before it spreads the genetic changes?and transforms the human species forever.

"THE COMING STORM illustrates a terrifying near future that has a direct line of sight to the politics and crises of today...there?s no doubt the book should make us sit up and listen." - The Big Thrill