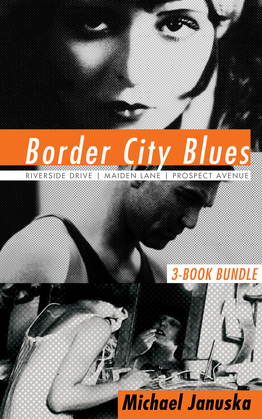 
Book #1 — Riverside Drive
Jack McCloskey returned to Windsor, Ontario, from the Great War lost in a battle with his inner demons. When he channels his energy into amateur fights, he's noticed by a gangster moonlighting as a boxing promoter. After a brief professional stint, Jack is invited to join the crew in the early days of Prohibition along the Detroit River.


Book #2 — Maiden Lane
It's the winter of 1923 and the border towns are under a deep freeze. As if the police didn't have their hands full, drug-smuggling, human trafficking, and a grisly find in the river steer them into unfamiliar territory, and a whisper of the occult brings a wholly unexpected twist.


Book #3 — Prospect Avenue
For bootleggers like Jack McCloskey, Prospect Avenue is just another dead end, and not even one of the better ones, but at least it’s away from prying eyes. But Jack is about to learn that what goes on in the shadows isn’t at all as “nice” as what he does, as the trade in opium — and people — picks up in Windsor.