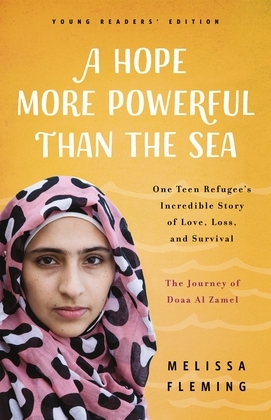 A Hope More Powerful Than the Sea (Young Readers' Edition)

A Hope More Powerful Than the Sea tells the story of Doaa Al-Zamel, a Syrian girl whose life was upended in 2011 by her country's brutal civil war. She and her family escape to Egypt, but life soon quickly becomes dangerous for Syrians in that country. Doaa and her fiancé decide to flee to Europe to seek safety and an education, but four days after setting sail on a smuggler's dilapidated fishing vessel along with five hundred other refugees, their boat is struck and begins to sink...

Doaa's eye-opening story, as told by Melissa Fleming, represents the millions of unheard voices of refugees who risk everything in a desperate search for a safe future.