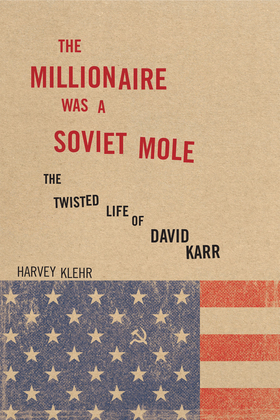 To Do It Straight Was Boring

by Harvey Klehr (Author)
Non-Fiction Biography & autobiography Historical Political History History by country United States Social science Political science Political Freedom & Security Intelligence
By the time he died under mysterious circumstances in Paris in 1979 at the age of 60, David Karr had reinvented himself numerous times. His remarkable American journey encompassed many different worlds—from communist newspapers to the Office of War Information, from muckraking columnist to public relations flack, from corporate raider to corporate executive, from moviemaker to hotel executive, from business fixer to Olympic Committee confidant. According to some sources it also included arms smuggler, corrupt businessman, visionary deal-maker, protector of Jewish emigrants from Russia, and behind-the-scenes political fixer. He worked as an agent for the KGB, and, most likely, assisted the Israeli Mossad.

Karr hobnobbed with a who’s who in the worlds of politics and business, ranging from Alan Cranston, Henry Wallace, Jerry Brown, Drew Pearson, John Tunney and Sargent Shriver to Armand Hammer, Aristotle Onassis, and business tycoons in France, Hollywood, and the liquor industry. He knew every American president from FDR to Gerald Ford and pre-occupied FBI chief J. Edgar Hoover for years.

Barely able to graduate from high school, Karr parlayed a freelance job in journalism into writing for the Daily Worker, the official newspaper of the Communist Party, in the 1930s. He worked for several Communist organizations investigating American fascists. He inveigled his way into FDR’s reelection campaign in 1940, and obtained a position at the Office of War Information regulating foreign-language newspapers, even though he neither spoke, read nor understood any language but English.

Targeted for his Communist connections by Congressman Martin Dies, he lost his government job and quickly became columnist Drew Pearson’s chief aide, producing news scoops by misrepresenting himself and paying other journalists for stories they couldn’t use.

In 1950 Karr was denounced on the floor of the US Senate by Senator Joseph McCarthy as Pearson’s KGB controller. Despite the charges of pro-communism, he oversaw the Friendship Train, a private initiative to send desperately needed food to Western Europe in support of the Marshall Plan.

Relocating to New York, Karr went into public relations, eventually founding his own firm, specializing in ginning up campaigns for proxy wars. A retired war hero whom he recruited to work with him, quit after several months, denouncing Karr’s moral compass. Karr orchestrated a series of business takeovers, using such unscrupulous methods as planting false stories, sliming opponents and hiring spies, culminating in the capture of Fairbanks, Whitney, a major American defense contractor. With virtually no business experience, Karr became its president and CEO.

After three years of corporate infighting, business reverses, and outsized executive compensation, outraged stockholders ousted Karr. He decamped to the entertainment industry, producing a series of movies and shows on Broadway and in Hollywood. Twice-divorced, Karr met a wealthy Frenchwoman, married her and moved to Paris. There, he brokered the sale of the iconic George V hotel to Sir Charles Forte, the British hotel magnate, and became its general manager.

Introduced to Armand Hammer by Sargant Shriver, the Ambassador to France, Karr accompanied the oil executive to the Soviet Union and partnered with him on several lucrative business deals before the two quarreled. With the backing of Lazard Freres, Karr began to broker deals for Western companies in Russia, establishing a close relationship with Alexei Kosygin’s son-in-law and sparking charges of bribery. He arranged the building of the first Western hotel in Moscow, obtained North American rights to the marketing of the 1980 Moscow Olympics mascot, and, in partnership with his old foe, Hammer, won the contract to market Olympic commemorative coins.

Returning from the hotel’s grand opening to Paris in 1979, he died suddenly and mysteriously. His widow—wife number four—roiled the French press with claims he had been murdered, naming the KGB, CIA, Mossad and Mafia as suspects, producing a media firestorm. A British journalist later accused him of plotting with Aristotle Onassis to assassinate Robert Kennedy on behalf of the PLO.

With four ex-wives, five children, an outdated will, a maze of off-shore corporations, and hidden partnerships with millions of dollars in assets, Karr’s estate took a decade to unravel. To Do It Straight Was Boring carefully details the remarkable life and death of David Karr. Based on extensive archival research and numerous interviews with former wives, business partners, friends and enemies, it reveals:

*his work on behalf of Israeli intelligence beginning in the 1960s

*his unscrupulous journalistic and business practices that brought him financial rewards

*the best evidence on whether he was murdered and, if so, by whom.

And, finally, David Karr’s turbulent life suggests that unscrupulous individuals have posed as both capitalists and communists when it suited their interests. When being a left-winger advanced his career, he was a left-winger; when being a hard-nosed businessman was advantageous, he played that game. No one could be sure which side he was on; perhaps not even David Karr.