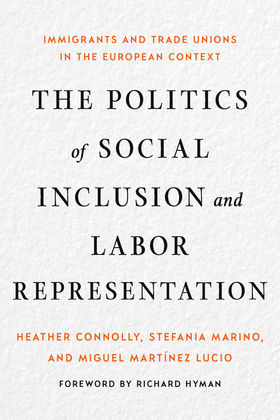 The Politics of Social Inclusion and Labor Representation

In The Politics of Social Inclusion and Labor Representation, Heather Connolly, Stefania Marino, and Miguel Martínez Lucio compare trade union responses to immigration and the related political and labour market developments in the Netherlands, Spain, and the United Kingdom. The labor movement is facing significant challenges as a result of such changes in the modern context. As such, the authors closely examine the idea of social inclusion and how trade unions are coping with and adapting to the need to support immigrant workers and develop various types of engagement and solidarity strategies in the European context.

Traversing the dramatically shifting immigration patterns since the 1970s, during which emerged a major crisis of capitalism, the labor market, and society, and the contingent rise of anti-immigration sentiment and new forms of xenophobia, the authors assess and map how trade unions have to varying degrees understood and framed these issues and immigrant labor. They show how institutional traditions, and the ways that trade unions historically react to social inclusion and equality, have played a part in shaping the nature of current initiatives. The Politics of Social Inclusion and Labor Representation concludes that we need to appreciate the complexity of trade-union traditions, established paths to renewal, and competing trajectories of solidarity. While trade union organizations remain wedded to specific trajectories, trade union renewal remains an innovative, if at times, problematic and complex set of choices and aspirations.