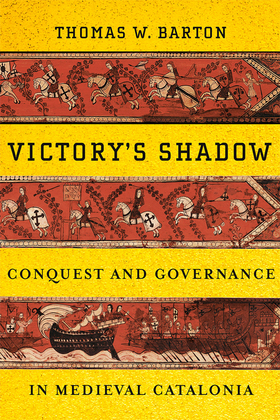 Catalonia a the beginning of the eleventh century was a patchwork of counties, viscounties, and lordships, bordered on the south by Islamic al-Andalus. Over the next two centuries, the region would dramatically transform as the counts of Barcelona secured title to the kingdom of Aragon through marriage and the newly constituted Crown of Aragon conquered the Muslim states on its frontier after decades of failed attempts that punctuated otherwise relatively peaceable interactions between local Christian and Muslim rulers. In Victory's Shadow, Thomas W. Barton offers a sweeping new account of how Christian forces captured and integrated the Muslim-ruled territories south of Barcelona.

Although numerous political rivals raced to be the first to seize these lands, successful conquest would occasion considerable organizational challenges that threatened to destabilize, politically and economically, the triumphant regime. The Aragonese monarchy's efforts to overcome these adversities, consolidate its authority, and capitalize on military victories would impose lasting changes on frameworks of governance throughout the Iberian peninsula. Based on over a decade of extensive archival research, Victory's Shadow brilliantly reconstructs the decisions, outcomes, and costs involved in conquest, considering its implications for ongoing debates regarding the dynamics of expansionism across the boundaries of medieval Europe.