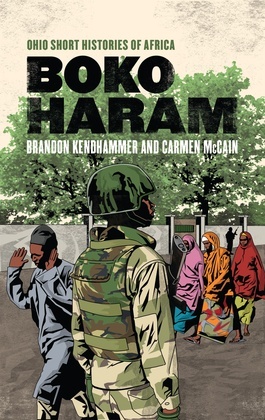 From its small-time origins in the early 2000s to its transformation into one of the world’s most-recognized terrorist groups, this remarkable short book tells the story of Boko Haram’s bloody, decade-long war in northeastern Nigeria. Going beyond the headlines, including the group’s 2014 abduction of 276 girls in Chibok and the international outrage it inspired, Boko Haram provides readers new to the conflict with a clearly written and comprehensive history of how the group came to be, the Nigerian government’s failed efforts to end it, and its enormous impact on ordinary citizens.


Drawing on years of research, Boko Haram is a timely addition to the acclaimed Ohio Short Histories of Africa. Brandon Kendhammer and Carmen McCain—two leading specialists on northern Nigeria—separate fact from fiction within one of the world’s least-understood conflicts. Most distinctively, it is a social history, one that tells the story of Boko Haram’s violence through the journalism, literature, film, and music made by people close to it.