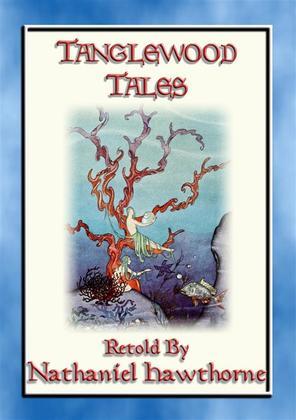 Herein are 6 richly illustrated tales, or rather, Greek Myths rewritten for children. The book includes the myths of:

Theseus and the Minotaur (Chapter : "The Minotaur")

Antaeus and the Pygmies (Chapter: "The Pygmies")

Hawthorne wrote this book while renting a small cottage in the Berkshires, a vacation area in Massachusetts for industrialists during the Gilded Age. The owner of the cottage, a railroad baron, renamed the cottage "Tanglewood" in honour of the book having been written there. Later, a nearby mansion was renamed Tanglewood, where outdoor classical concerts were held, which became a Berkshire summer tradition. Ironically, Hawthorne hated living in the Berkshires.

The Tanglewood neighbourhood of Houston was also named after the book. The book was a favourite of Mary Catherine Farrington, the daughter of Tanglewood developer William Farrington. It also reportedly inspired the name of the thickly wooded Tanglewood Island in the state of Washington.

Not a bad legacy for a book of Greek myths rewritten for children…..!