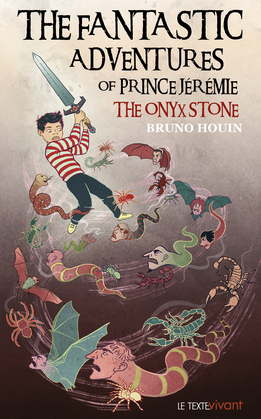 The Fantastic adventures of prince Jeremie

The adventure of Jeremie and the Onyx Stone !

When his parents died, Jeremie moved in with Mr Hollbrook, his uncle. Between Chelsea, his young cousin who is unhappy to see the arrival of this new inhabitant, and Prudence, the old both contentious and gruff governess, Jeremie felt more lonely than ever.
Even worse, his new house seems to harbour strange secrets: a flying piano, an old man who appeared and disappeared mysteriously.
Whilst Halloween is in full swing and that the bizzaroides phenomena multiply, Jeremie, Chelsea and their new friends discover the existence of a fantasy world.There, Jeremy knews he has been anointed and commissioned to assist Phoronuus who fought against the Baalamites, the fallen angels who have to destroy humanity.
From the mountain tops without snow to the borders of the Ténébreuse Sea, then Jeremy and his friends are embarking in an epic quest, looking for the Onyx mysterious stone.

Discover without further delay this youth novel and follow the adventures of Jérémie, Chelsea and his friends!

The next morning, Jeremie still felt a strong pressure in his arm followed by a solid slap on his buttocks. “It’s time lazy boy !”
“Chelsea?! You are crazy!? I hate you!”
She went out with a laugh and he woke up, really surprised. He was in his bed! And he didn’t remember having gone to bed… So he had not dreamt! But who put him to bed?! The crazy old man? If he had fought against him all night long, this must have produced such a hullabaloo.
“Chelsea ?”
“Yes ?”
The little girl was curling her hair.
“Did you hear some noise from the attic last night?”
She got annoyed.

“No, I didn’t and you are going to be late!”
Jeremie jumped out of bed and got dressed. It was all unbelievable! He was sure that he had fought against the crazy old man all night long. But he did not feel tired. This was absolutely incredible. However, Jeremie decided that for the time being, he would not try to understand anything. He put on his old knee-ripped jeans, the one which madehim look an adventurer. He found it timely because he knew that a mysterious adventure was looming ahead…
During the breakast, Jeremie kept silent. He was in deep meditation. From time to time, Chelsea fixed him with mocking eyes. But he couldn’t, and he wouldn’t say anything to anyone. And who knows? May be the old man would harshly punish and Jeremie was well aware how powerful the man was. He knew he couldn’t make a show of his importance before such a chap. The man could have killed him…