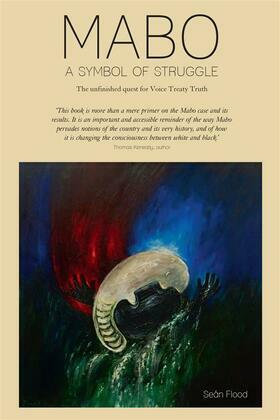 Mabo - A Symbol of Struggle

‘This book is more than a mere primer on the Mabo case and its results. It is an important and accessible reminder of the way Mabo pervades notions of the country and its very history, and of how it is changing the consciousness between white and black.’

Our Aboriginal and Torres Strait Islander tribes were the first sovereign nations of the Australian continent and its adjacent islands . . . This sovereignity is a spiritual notion: the ancestral tie between the land, or ‘mother nature’ . . .

Written for the general reader, teachers and students the book begins with a plea for a Makarrata (Treaty) and ends with the Uluru Statement calling on the Australian Government for a First Nations’ traditional owners body, enshrined in the Australian Constitution, to consult on government legislation and policy affecting their issues such as culture, preservation of language, land management, native title and passive welfare.

The High Court Mabo decision is dealt with in an engaging and accessible way free of legal jargon. A chapter on the Nature of Native Title has insights from Aboriginal Elders like Pat Dodson and a moving account of connection to country by a blind Aboriginal woman in her seventies who had survived the Coniston massacre in 1927. The ongoing impact of colonialism on Australia’s natural environment is also included.

Native Title in the Courts Since Mabo is a Chapter written by lee Corbett PhD (UNSW) (Native Title and Constitutionalism in Australia), NSW Barrister, is a comprehensive summary of all the significant decisions since Mabo concluding with Warrie an important case involving Aboriginal Peoples’ relationship to country as essentially a ‘spiritual affair’ giving rise to exclusive possession rights.

While the author was writing the revision for this edition Michael Brown, an unarmed African American student, was shot and killed by a white police officer in Ferguson Missouri. This led Flood to narrate the treatment of the other today under ‘a white power structure treating blacks as second- class citizens’. Recent deaths of Aboriginal people in custody are examined and examples of beneficial agreements from native title processes that allow Indigenous Australians to become ‘active agents in (their) own development’ are included in Part II, The Impact of Colonialism.

Flood offers a strong case for the adoption of the Uluru Statement delivered to the Federal Government on the 26th May 2017 as a road map forward for First Nations to, in the words of Galarrwuy Yunupingu, ‘…be part of this nation…given an equal shot at the prosperity of this nation…unity and togetherness -a shared future…’ The unfinished quest for recognition.

Eight pages of colour references including the AIATSIS map of Indigenous Australian language groups, a Glossary of unfamiliar terms, Suggested Lines of Inquiry for Teachers and Students, Past exam questions, Recommended reading and viewing, Footnotes and 201 Endnotes.

Larissa Behrendt, Professor of Indigenous Research and Director of Research at Jumbunna House of Learning at UTS Sydney.

‘The message is simple and capable of healing racial disharmony.’