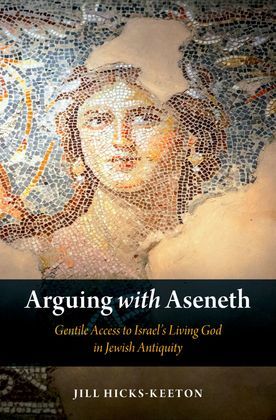 Arguing with Aseneth shows how the ancient Jewish romance known as Joseph and Aseneth moves a minor character in Genesis from obscurity to renown, weaving a new story whose main purpose was to intervene in ancient Jewish debates surrounding gentile access to Israel's God. Written in Greco-Roman Egypt around the turn of the era, Joseph and Aseneth combines the genre of the ancient Greek novel with scriptural characters from the story of Joseph as it retells Israel's mythic past to negotiate communal boundaries in its own present. With attention to the ways in which Aseneth's tale "remixes" Genesis, wrestles with Deuteronomic theology, and adopts prophetic visions of the future, Arguing with Aseneth demonstrates that this ancient novel inscribes into Israel's sacred narrative a precedent for gentile inclusion in the people belonging to Israel's God. Aseneth is transformed from material mother of the sons of Joseph to a mediator of God's mercy and life to future penitents, Jew and gentile alike. Yet not all Jewish thinkers in antiquity drew boundary lines the same way or in the same place. Arguing with Aseneth traces, then, not only the way in which Joseph and Aseneth affirms the possibility of gentile incorporation but also ways in which other ancient Jewish thinkers, including the apostle Paul, would have argued back, contesting Joseph and Aseneth's very conclusions or offering alternative, competing strategies of inclusion. With its use of a female protagonist, Joseph and Aseneth offers a distinctive model of gentile incorporation--one that eschews lines of patrilineal descent and undermines ethnicity and genealogy as necessary markers of belonging. Such a reading of this narrative shows us that we need to rethink our accounts of how ancient Jewish thinkers, including our earliest example from the Jesus Movement, negotiated who was in and who was out when it came to the people of Israel's God.