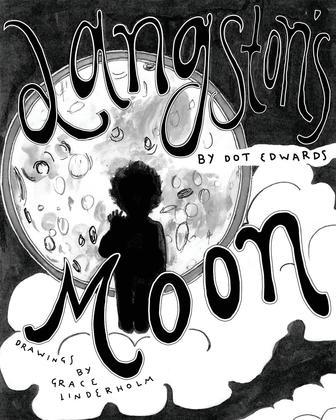 When little Langston sees a big harvest moon for the first time, he is mesmerized. To him the moon looks like a big, creamy, dreamy, sugar-cookie close enough to touch. He’s not interested in learning facts about “his moon,” but simply wants to run outside and see the moon every night. Alas, the weather does not cooperate. A cloudy night followed by many snowy ones hide Langston’s moon for a long time. When the moon finally reappears, it is a thin sliver of light with a few small stars around it. Langston worries that a sky monster has taken a big greedy bite from his sugar-cookie moon and the tiny lights he sees near the moon are not stars, but are moon-cookie crumbs left over from the sky monster’s treat. Langston advises his moon to hide from the sky monster, but, instead, the moon grows bigger and bigger and bigger! Finally, the moon reappears, full and beautiful, just as it had the first time he saw it. Mommy, who had been unaware of Langston’s concerns, explains that the moon is attached to the earth, as if tied to us by a long string. Sometimes looking full and other times appearing smaller, the moon will always be our closest neighbor in the sky. She tells him that men walked on the moon years ago and found it to be a big, dusty rock, not a tasty sugar cookie. And they didn’t see a single sky monster. Langston realizes that the science and history of his moon are even more exciting than his fantasies. Now he wants to learn more about the moon and perhaps even travel there someday.