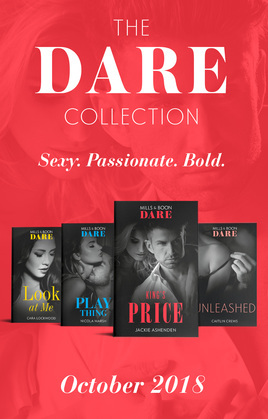 She’s had fantasies…Now he’s bringing them to life!

Notorious seducer Thor Ragnarsson runs the scandalous Hotel Viking in Reykjavik, where tourists go to fulfil their wildest fantasies. When strait-laced American professor Margot Cavendish gets snowed in while studying Icelandic sex culture, Thor challenges her inhibitions with some very hands-on research—soon, she’s exploring every inch of his delicious body. It’s only one night of passion, but when the snowstorm clears they’re left aching for more…

She's been playing it safe…But now it's time for a new game plan!

Prim and proper Charlotte Baxter lets her naughty side run wild when she meets a hot stranger one night. She’s riding on a high—until she discovers her mystery man is also her demanding new boss! With her career her top priority, an affair with Alex Bronson is forbidden… So why is she ready to risk it all for another scorching encounter?

Unscrupulous businessman Leon King is going legit. A calculated marriage to the daughter of a wealthy Sydney philanthropist could help redeem his family’s reputation. But Vita Hamilton has her own scandal to shake: a decade-old sex tape that still haunts her. Getting emotionally involved with Vita will cost Leon dearly. With their intense sexual connection, is it a price this King is willing to pay?

Look at Me by Cara Lockwood

“Want to do more than watch?” Her hot new neighbour's even hotter dare…

Chloe Park only meant to peek at him. Lean, hard, and tattooed, Jackson Drake is hotness incarnate—and she can see right into his living room! Her sexy spectating drives them both near-insane with lust. And with every wicked line they cross, Chloe falls harder for the bad boy next door…