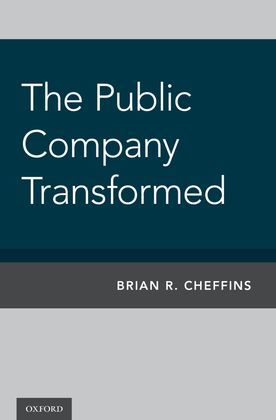 For decades, the public company has played a dominant role in the American economy. Since the middle of the 20th century, the nature of the public company has changed considerably. The transformation has been a fascinating one, marked by scandals, political controversy, wide swings in investor and public sentiment, mismanagement, entrepreneurial verve, noisy corporate "raiders" and various other larger-than-life personalities. Nevertheless, amidst a voluminous literature on corporations, a systematic historical analysis of the changes that have occurred is lacking. The Public Company Transformed correspondingly analyzes how the public company has been recast from the mid-20th century through to the present day, with particular emphasis on senior corporate executives and the constraints affecting the choices available to them. The chronological point of departure is the managerial capitalism era, which prevailed in large American corporations following World War II. The book explores managerial capitalism's rise, its 1950s and 1960s heyday, and its fall in the 1970s and 1980s. It describes the American public companies and executives that enjoyed prosperity during the 1990s, and the reversal of fortunes in the 2000s precipitated by corporate scandals and the financial crisis of 2008. The book also considers the regulation of public companies in detail, and discusses developments in shareholder activism, company boards, chief executives, and concerns about oligopoly. The volume concludes by offering conjectures on the future of the public corporation, and suggests that predictions of the demise of the public company have been exaggerated.