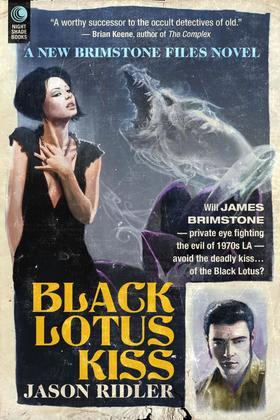 Winter 1970. As rock stars die of excess and revolution fills the air, newly minted private investigator James Brimstone is spending his days wandering the streets of Los Angeles, looking for low rent cases as far as possible from his last work-for-hire, an unfortunate run-in with the occult on a pornographic film set. But fate has a funny way of slapping Brimstone with the dark hand of magic.

When a deadly attack on a veteran’s hall nearly kills his Korean War buddy Cactus, the only clue left behind is a leaf from the Black Lotus, a war drug used in ancient Babylonia . . . that’s supposedly been extinct since the pyramids were young.

Between bump-ins with rock star prophets and berserk professional wrestlers, Brimstone races to find out who’s behind the supernatural drug turning the City of Angel’s citizens into sex- and violence-crazed maniacs, as well as a mysterious creature of smoke and evil stalking the streets of L.A. On the boardwalk between our world and nightmares, Brimstone must face the darkness within himself to see if he, too, will fall victim . . . to the Black Lotus Kiss.