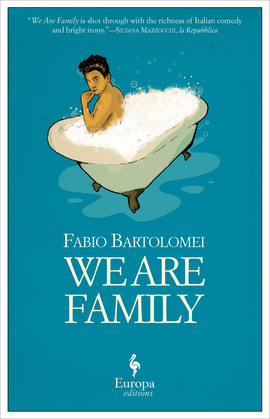 Al Santamaria is a child prodigy, maybe a genius. It is not out of the realm of possibility that he, alone, will save the human race. But first, he has to solve a far more urgent problem: finding a home for his family.

He exists, like many kids, in a realm located somewhere between reality and fantasy, enjoying time with imaginary friends and wielding his magical powers. He has a wonderful relationship with his father, Mario Elvis, and his mother, Agnese, and he’s convinced he has the best family in the world.

But life isn’t all roses for the Santamaria family. They are typical of many Italian families today, whose existences seem suspended between conflicting impulses: on the one hand, delusions of grandeur and immoderate ambition, and on the other nostalgia for a past golden age and the secret wish that somebody, anybody, will come to their rescue. Big dreams, it appears, exist to be crushed.

But Al is not about to give up. He lives in a marvelous world of his own. He has the energy, imagination, and unselfconscious talents of a child. And, although he doesn’t know it yet, he is going to remain a child his entire life.