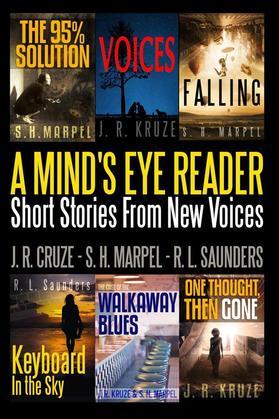 Have you ever thought some very dangerous thoughts?

Ones that could destroy all life as you knew it?

In these six stories by three authors, they do just that. Of course, fiction is safer than real life, so it's much easier to test things here. ...Or so we've been told.

In these stories are ideas that will captivate, and excite you to new thoughts and ideas of your own. Because the universe we live in is just a hair's-breadth away from the fictional ones we create.

If history is any judge, these authors may be writing are things that will be in our own present any time now.

Of course, that's only if you think their thoughts through...

- Keyboard in the Sky by R. L. Saunders

(From "One Thought, Then Gone")

I'D FIGURED IT ALL out by the first day as a high school sophomore. And I could care less. Because it wasn't real. None of it.

Schooling was another trap built to "keep people safe." And get them ready to have a job and accept the rat-race, wage-slave mentality.

Not that my parents or teachers or anyone else around could really understand what I was going through. They all just set it up as another "coming of age" drama that always played out. All the older siblings I inherited had made it through, somehow. In their own ways.

The trick was - I knew they were all part of the same trap.

I didn't belong here, that I knew. And I was here to keep me safe from something far darker and more sinister than going on welfare, or being homeless, or doing illegal drugs and going to jail.

Something was out there much darker and more deadly than anything they could threaten me with. I could feel it in all my body from my bones to the lady parts that I was supposed to "think with" at this age.

And it became more and more obvious the more I tried to "fit in" by attempting to work out the customs and morality they all had. All the "now-you're-supposed-to's" that they probably filed in a non-existent loose leaf binder we were all issued when we were born.

The trick is that I wasn't born. I had no memory of it. And all the things they told me I liked to do when I was a kid - I didn't remember any of it. Because they were training me to just accept, just go along, just act on what they told me my memories were.

And they showed me "movies" of when I was younger. Filmed on something called "Super 8" and then later it was on "video tape."

All made up to just reinforce the programming I'd been given along with this body.

Because it didn't make sense. And the more sense I tried to make out of it, the worse it got.

Until I got a clue.

Scroll Up And Get Your Copy Now.