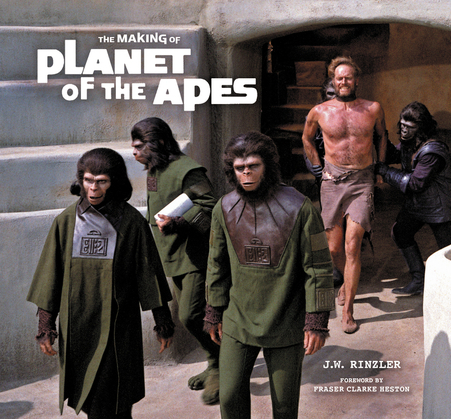 The Making of Planet of the Apes

Based on Pierre Boulle's novel La Planéte de singes, the original Planet of the Apes was one of the most celebrated films of the 1960s and beyond. Starring Hollywood icons Charlton Heston and Roddy McDowall, the movie struck a chord with the world and sparked a franchise that included eight sequels, two television series, and a long-running comic book. Now, five decades after its theatrical release, New York Times bestselling author J. W. Rinzler tells the thrilling story of this legendary Hollywood production—a film even Boulle thought would be impossible to make.

With a foreword by Fraser Heston, Charlton Heston's son, The Making of Planet of the Apes is an entertaining, informative experience that will transport readers back to the strange alternate Earth ruled by apes, and bring to life memorable characters such as Cornelius, Dr. Zira, Dr. Zaius, and Taylor, the human astronaut whose time-traveling sparks an incredible adventure. Meticulously researched and designed to capture the look and atmosphere of the film, The Making of Planet of the Apes is also packed with a wealth of concept paintings, storyboards, and never-before-seen imagery—including rare journal pages and sketches from Charlton Heston's private collection—as well as color and black-and-white unit photography, posters, and more unique ephemera.

Comprehensive in scope, The Making of Planet of the Apes is the definitive look at the original blockbuster film, a must-have for fans, film buffs, and collectors alike.