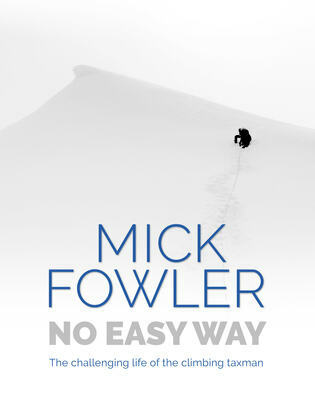 ‘If we were guaranteed success in everything we tried then life would be pretty boring.’

Mainstream news reports about climbing are dominated by action from the world’s highest mountains, more often than not focusing on tragedy and controversy. Far removed from this high-altitude circus, a group of visionary and specialist mountaineers are seeking out eye-catching objectives in the most remote corners of the greater ranges and attempting first ascents in lightweight style.

Mick Fowler is the master of the small and remote Himalayan expedition. He has been at the forefront of this pioneering approach to alpinism for over thirty years, balancing his family life, a full-time job at the tax office and his annual trips to the greater ranges in order to attempt mountains that may never have been seen before by Westerners, let alone climbed by them.

In No Easy Way, his third volume of climbing memoirs following Vertical Pleasure and On Thin Ice, Fowler recounts a series of expeditions to stunning mountains in China, India, Nepal and Tibet. Alongside partners including Paul Ramsden, Dave Turnbull, Andy Cave and Victor Saunders, he attempts striking, technically challenging unclimbed lines on Shiva, Gave Ding and Mugu Chuli – with a number of ascents winning prestigious Piolets d’Or, the Oscars of the mountaineering world.

Written with his customary dry wit and understatement, he manages challenges away – the art of securing a permit for Tibet – and at home – his duties as Alpine Club president – all the while pursuing his passion for exploratory mountaineering.