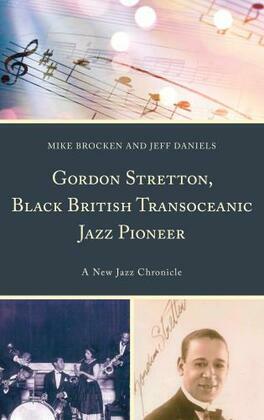 This extensively researched text concerning the life and career of Liverpool-born Black jazz musician Gordon Stretton not only contributes to the important debate concerning the transoceanic pathways of jazz during the 20th century, but also suggests to the jazz fan and scholar alike that such pathways, reaching as they also did across the Atlantic from Europe, are actually part of a largely ignored therefore partially-hidden history of 20th century jazz performance, industry and influence. The work also exists to contribute to a more complete picture of the significance of diaspora studies across the spectrum of popular music performance, and to award to those Liverpool musicians who were not contributors to the city’s musical visage post-rock ‘n’ roll, a place in popular music history.

Gordon Stretton was a jazz pioneer in several senses: he emerged from a poverty-stricken, racially marginalized upbringing in Liverpool to develop a popular music career emblematic of Black diasporan experience. He was a child dancer and singer in the Lancashire Lads (the troupe which was also part of a young Charlie Chaplin’s development), a well-respected solo touring artist in the UK as ‘The Natural Artistic Coon’, a chorister and musical director with the Jamaican Choral Union and, having encountered syncopated music, a jazz percussionist, multi-instrumentalist and vocalist (not to mention a ground-breaking bandleader). All of these musical experiences took place through time on his own terms as he learnt his craft ‘on the hoof’ via many different encounters with musical genres from Liverpool to London, Paris, Brussels, Rio, and Buenos Aires. Gordon Stretton was truly a transoceanic jazz pioneer.