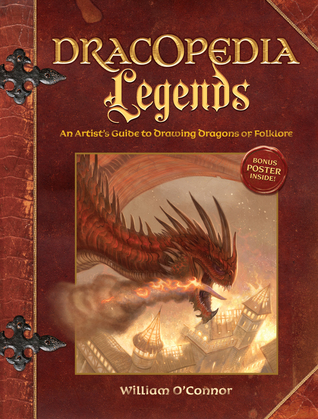 It was a stormy night in Northern Wales when I and my apprentice, Conceil, had to take shelter in an old stalkers cottage along Caernarfon Bay. A peat fire was lit, and our guide, Sir Geoffrey Guest, regaled us with ancient stories of dragons while, outside, the gale battered the coastline....

What follows is a retelling of classical legends, plucked from the folklore of cultures spread across time and around the world, from ancient Greece and China to Medieval England and Norse mythology. You'll discover the epochal dragons who reigned over snow and sea; those with wings and flaming maws; those who thwarted Beowulf in underground lairs; and those slain by Hercules' mighty sword.

Dracopedia Legends presents 13 epic tales of heroes vanquishing dragons, accompanied by lavish dragon illustrations inspired by the myths. Acting as both a storybook and art guide, each chapter also includes in-depth instructions to reveal how to conceptualize, research and design every iconic battle scene, broken down into multiple stages so you can create your own commanding and evocative narrative paintings.