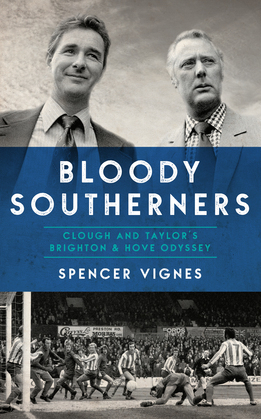 Imagine Pep Guardiola quitting Manchester City to take over at Rochdale. Or José Mourinho walking out on United to join Southend. That sort of thing just wouldn’t happen, would it?

At that time Brian Clough was managerial gold dust, having taken Derby County to the Football League title and to the semi-finals of the European Cup. After those feats, he and his sidekick Peter Taylor could have managed anywhere. And yet the most famous men in British football decided to take the reins at Brighton & Hove Albion, sixth bottom of the old Third Division, for what would prove a controversial and ultimately unsuccessful spell that would test their friendship to breaking point.

The move to a sleepy backwater football club made little sense then and, forty years on, it remains a mystery. It seems especially odd considering Clough’s aversion to the south and refusal to relocate his home from Derby. Featuring candid interviews with the men who played under Clough and Taylor at Brighton, Bloody Southerners attempts to make sense of the strangest managerial appointment in English post-war football. What shines through in page after page of never-before-heard stories is the profound complexity of both characters.