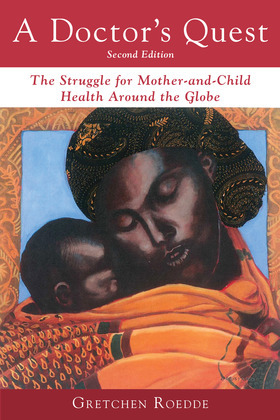 A doctor grapples with the challenges of mother and child health in the developing world.

Recounting medical missions in half of the thirty countries in which she has worked for the past twenty-five years in Africa, Asia, and the South Pacific — from Darfur in Sudan to Papua New Guinea and Bhutan — Dr. Gretchen Roedde shares the grim reality of world politics and bureaucratic red tape on the front lines as a doctor in mother-and-child health and HIV/AIDS.

A Doctor’s Quest tells the stories of the hopes of village women struggling to give birth safely, their often corrupt leaders, and countries trying to bring evil despots to justice. The book analyzes the slow progress in global maternal health, contrasting the affluence of the few with the precarious hold on survival of the world’s poorest, where economic realities force families to sell young girls into marriage at the age of thirteen to face higher risk of death from early child-bearing.