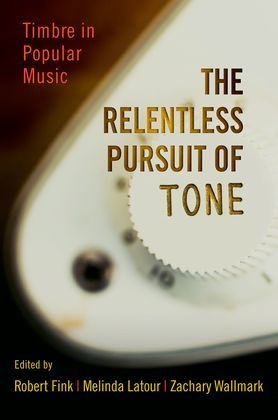 The Relentless Pursuit of Tone

The Relentless Pursuit of Tone: Timbre in Popular Music assembles a broad spectrum of contemporary perspectives on how "sound" functions in an equally wide array of popular music. Ranging from the twang of country banjoes and the sheen of hip-hop strings to the crunch of amplified guitars and the thump of subwoofers on the dance floor, this volume bridges the gap between timbre, our name for the purely acoustic characteristics of sound waves, and tone, an emergent musical construct that straddles the borderline between the perceptual and the political. Essays engage with the entire history of popular music as recorded sound, from the 1930s to the present day, under four large categories. "Genre" asks how sonic signatures define musical identities and publics; "Voice" considers the most naturalized musical instrument, the human voice, as racial and gendered signifier, as property or likeness, and as raw material for algorithmic perfection through software; "Instrument" tells stories of the way some iconic pop music machines-guitars, strings, synthesizers-got (or lost) their distinctive sounds; "Production" then puts it all together, asking structural questions about what happens in a recording studio, what is produced (sonic cartoons? rockist authenticity? empty space?) and what it all might mean.