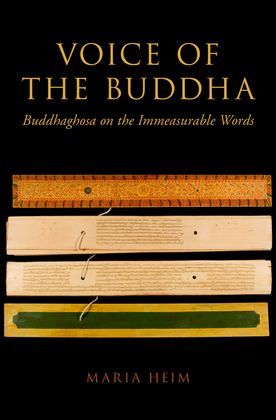 Voice of the Buddha

What would a Buddhist theory of texts look like through the lens of the 5th-century thinker Buddhaghosa? In Voice of the Buddha, Maria Heim reads from the principal commentator, editor, and translator of the Theravada intellectual tradition, yielding fresh insight into all three collections of the early Pali texts: Vinaya, the Suttas, and the Abhidhamma. Buddhaghosa considered the Buddha to be omniscient, the Buddha's words to be "oceanic." Every word, passage, book--indeed the corpus as a whole--is taken to be "endless and immeasurable" in Buddhaghosa's view. Commentarial practice thus requires disciplined methods of expansion, drawing out the endless possibilities for meaning and application. Heim considers Buddhaghosa's theories of texts, and follows his practices of exegesis to discover how he explored scripture's infinity.

By examining the significance of the immeasurability of scripture in commentarial practice and as a general principle, this book offers new tools to understand the huge scriptural and commentarial literature of the Pali tradition. And by taking seriously a traditional commentator's theory of texts, it beckons us to learn from commentaries themselves how we might read and interpret them and the texts on which they comment.