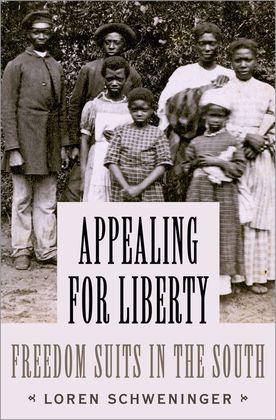 Dred Scott and his landmark Supreme Court case are ingrained in the national memory, but he was just one of multitudes who appealed for their freedom in courtrooms across the country. Appealing for Liberty is the most comprehensive study to give voice to these African Americans, drawing from more than 2,000 suits and from the testimony of more than 4,000 plaintiffs from the Revolutionary era to the Civil War. Through the petitions, evidence, and testimony introduced in these court proceedings, the lives of the enslaved come sharply and poignantly into focus, as do many other aspects of southern society such as the efforts to preserve and re-unite black families. This book depicts in graphic terms, the pain, suffering, fears, and trepidations of the plaintiffs while discussing the legal systemlawyers, judges, juries, and testimonythat made judgments on their "causes," as the suits were often called.

Arguments for freedom were diverse: slaves brought suits claiming they had been freed in wills and deeds, were born of free mothers, were descendants of free white women or Indian women; they charged that they were illegally imported to some states or were residents of the free states and territories. Those who testified on their behalf, usually against leaders of their communities, were generally white. So too were the lawyers who took these cases, many of them men of prominence, such as Francis Scott Key. More often than not, these men were slave owners themselves-- complicating our understanding of race relations in the antebellum period.

A majority of the cases examined here were not appealed, nor did they create important judicial precedent. Indeed, most of the cases ended at the county, circuit, or district court level of various southern states. Yet the narratives of both those who gained their freedom and those who failed to do so, and the issues their suits raised, shed a bold and timely light on the history of race and liberty in the "land of the free."