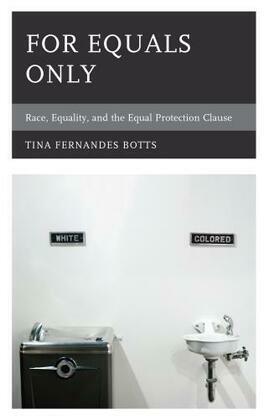 by Tina Fernandes Botts (Author)
Buy for $38.00 Excerpt
Nonfiction Human science Philosophy Social Law Public Constitutional International Public
warning_amber
One or more licenses for this book have been acquired by your organisation details

This book philosophically explores how changing conceptions of race and equality have affected Supreme Court interpretations of the Equal Protection Clause of the 14th Amendment to the U.S. Constitution over the years. In the years since the 14th Amendment was ratified in 1868, in its decisions interpreting the Equal Protection Clause, the Supreme Court has switched from using a sociocultural concept of race to using a biological concept of race, and during the same time period has switched from using a social to a legal concept of equality. One result of these trends is the recent emergence of something called 'reverse discrimination.' Another result is that the Equal Protection Clause no longer specially protects racialized persons from racial discrimination, as it was originally intended to do. Using the tools of legal hermeneutics, critical philosophy of race, and critical race theory, key cases of racial discrimination in equal protection law are examined through a historical lens. The Supreme Court’s switch, over the years, from interpreting the Equal Protection Clause as specially protecting racialized persons from continued racial discrimination after the end of the institution of chattel slavery, to interpreting the Clause as protecting everyone from racial discrimination, is tracked alongside changing conceptions of race and equality. As the concept of race became biological, the concept of equality became legal, and the result was the elimination of remedying the negative effects of chattel slavery on the equality status of racialized persons from the Supreme Court’s list of priorities.