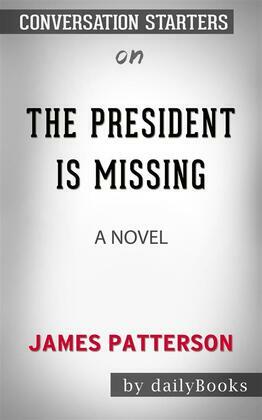 The President Is Missing: A Novel by James Patterson | Conversation Starters

The President Is Missing: A Novel by James Patterson | Conversation Starters

Former United States President Bill Clinton partners with veteran author James Patterson in the New York Times bestselling novel The President Is Missing. This novel confronts a threat that is so massive that it jeopardizes not just Wall Street and Pennsylvania Avenue, but the whole America. Fear and uncertainty grip the whole nation. There are rumors of cyberterror, espionage and a traitor in the Cabinet. Even the President himself is not exempted and he becomes a suspect. Suddenly, he disappears from public view. Set over the course of only three days, The President Is Missing highlights the vulnerabilities and the inner workings of our great nation. This novel is filled with information that only a former President would know. This is the most terrifying, authentic and original novel to come along in decades.

Sunday Times London is gripped by The President Is Missing. They praise the novel and remark that “the plotting is immaculate... the writing is taut.” Time described this novel as “filled with the classic tropes of a big commercial thriller.” Ballard and Bosch series author Michael Connelly praises the duo behind this novel, “Clinton and Patterson are a dream combo. Two great storytellers, one inside and one outside, both at the top of the game.” He goes on to decribe the book as “an undeniably gripping ride through the hidden passageways of power and politics.”