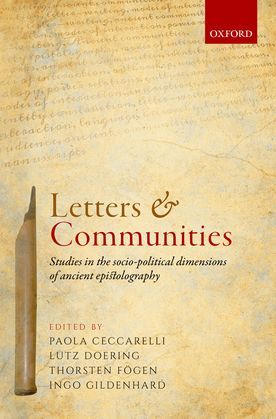 The writing of letters often evokes associations of a single author and a single addressee, who share in the exchange of intimate thoughts across distances of space and time. This model underwrites such iconic notions as the letter representing an 'image of the soul of the author' or constituting 'one half of a dialogue'. However justified this conception of letter-writing may be in particular instances, it tends to marginalize a range of issues that were central to
epistolary communication in the ancient world and have yet to receive sustained and systematic investigation. In particular, it overlooks the fact that letters frequently presuppose and were designed to reinforce communities-or, indeed, to constitute them in the first place.

This volume explores the interrelation of letters and communities in the ancient world, examining how epistolary communication aided in the construction and cultivation of group-identities and communities, whether social, political, religious, ethnic, or philosophical. A theoretically informed Introduction establishes the interface of epistolary discourse and group formation as a vital but hitherto neglected area of research, and is followed by thirteen case studies offering multi-disciplinary
perspectives from four key cultural configurations: Greece, Rome, Judaism, and Christianity. The first part opens the volume with two chapters on the theory and practice of epistolary communication that focus on ancient epistolary theory and the unavoidable presence of a letter-carrier who introduces
a communal aspect into any correspondence, while the second comprises five chapters that explore configurations of power and epistolary communication in the Greek and Roman worlds, from the archaic period to the end of the Hellenistic age. Five chapters on letters and communities in Ancient Judaism and Early Christianity follow in the third, part before the volume concludes with an envoi examining the trans-historical, or indeed timeless, philosophical community Seneca the Younger construes in
his Letters to Lucilius.