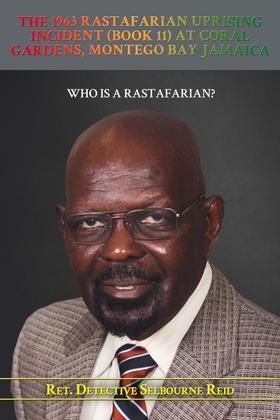 Selbourne Reid, the author of this book is a retired Detective Inspector of Police in the Jamaica Constabulary Force. This would be similar to a Captain in some other law enforcement or Police force in the USA. He was a member of the Rifle Squad which travelled in front with Inspector Fisher who led the charge in the operation against the Rastafarians. He saw a man being chopped and killed within three to five (3ft-5ft) feet of where he was standing. When he turned around to run from the scene he observed that one of his co-workers who was standing behind him was already seriously wounded and was bleeding from a machete wound he received across the back of his neck and shoulder. That indicated that a Killer Rasta-man had passed behind him and chopped his co-worker. Selbourne ran from the scene of terror as there was no ammunition in his rifle. He escaped unscratched. He credits his escape to God’s Divine Intervention on his behalf. Fisher had refused to issue the ammunition to his men. He apparently was hoping to hand over command to Superintendent Jimmy Ricketts who ordered the reinforcement to meet him at the scene but could not be found when he Fisher and his men arrived. Fisher was seriously wounded but was saved by a brave corporal who got one round of ammunition from him, quickly loaded a rifle and shot the Rasta-man who was in the act of killing Fisher while he was on the ground. There is a lot of humor in this book. For example; Inspector Fisher rhetorically and consistently asked “Where is Jimmy” on most of the occasions when he was requested to issue the ammunition to his men. Many people after learning of what transpired, wondered if Fisher was saying ‘where is Jimmy’ where is Jimmy’ even when he was being chopped in his head by a Rasta- man.