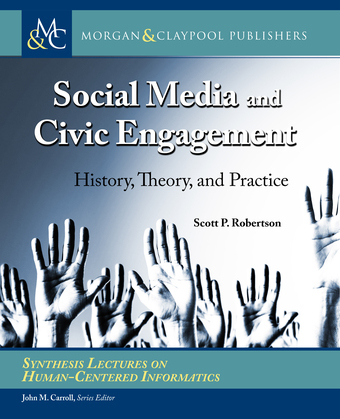 Social media platforms are the latest manifestation in a series of sociotechnical innovations designed to enhance civic engagement, political participation, and global activism. While many researchers started out as optimists about the promise of social media for broadening participation and enhancing civic engagement, recent events have tempered that optimism. As this book goes to press, Facebook is fighting a battle over the massive disclosure of user information during the 2016 U.S. presidential campaign, social analytics company Cambridge Analytica is being revealed as a major player in micro profiling voters in that same election, bots and fake news factories are undermining democratic discourse via social media worldwide, and the president of the United States is unnerving the world as a stream-of-consciousness Twitter user.

This book is a foundational review of current research on social media and civic engagement organized in terms of history, theory, practice, and challenges. History reviews how researchers and developers have continuously pushed the envelope to explore technology enhancements for political and social discourse. Theory reveals that the use of globally-networked social technologies touches many fields including political science, sociology, psychology, media studies, network science, and more. Practice is examined through studies of political engagement both in democratic situations and in confrontational situations. Challenges are identified in order to find ways forward.

For better or worse, social media for civic engagement has come of age. Citizens, politicians, and activists are utilizing social media in innovative ways, while bad actors are discovering possibilities for spreading dissension and undermining trust. We are at a sobering inflection point, and this book is your foundation for understanding how we got here and where we are going.