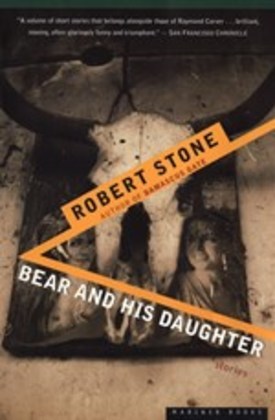 Bear and His Daughter

Spanning nearly thirty years in the career of the New York Times–bestselling author of Dog Soldiers, the stories collected here explore, acutely and powerfully, the humanity that unites us.

In “Miserere,” a widowed librarian with an unspeakable secret undertakes an unusual and grisly role in the anti-abortion crusade. In his classic story “Helping,” the author examines a moment of climactic confrontation in the life of Elliot, a therapist beset by his own demons. “Under the Pitons” is the harrowing story of a reluctant participant in a drug-running scheme and the grim and unexpected consequences of his involvement. The title story is a riveting account of the tangled lines that weave the relationship of a father and his grown daughter.

In these stories, Robert Stone’s characters tug at the edges of experience, laying bare the truths that keep us alive.

“Stone, one of contemporary fiction’s big talents, probes his characters to the existential core. At stake in these dazzling stories is nothing less than his characters’ souls.” —People

“The landscapes of drug addiction and war and its aftermath are depicted with rueful wit and furious intensity in these seven strongly imagined tales. . . . Combining Hemingway-like vigor with Kafkaesque despair . . . Stone has few contemporary peers, and no superiors.” —Kirkus Reviews