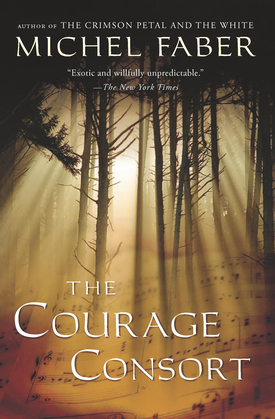 by Michel Faber (Author)
Fiction Short Stories Literary
Three novellas filled with “gallows humor and a sense of real peril,” by the acclaimed author of The Book of Strange New Things (The New York Times).

The bestselling author of The Crimson Petal and the White “draws his characters with assured comic efficiency” (The Guardian), using “evocative language” to offer up “intriguing glimpses of unfamiliar worlds” (Los Angeles Times), in these acclaimed novellas.

In “The Courage Consort,” an a cappella vocal ensemble is sequestered in a Belgian château to rehearse a monstrously complicated new piece, but competing artistic temperaments and sexual needs create as much discordance as the avant-garde music. In “The Hundred and Ninety-Nine Steps,” a lonely woman joins an archaeological dig at Whitby Abbey and unearths a mystery involving a long-hidden murder. And in “The Fahrenheit Twins,” strange children, identical in all but gender, are left alone at the icy zenith of the world by their anthropologist parents to create their own ritual civilization.

From a wildly inventive author whose novel The Book of Strange New Things was named one of 2014’s best reads by everyone from the New Yorker to io9, The Courage Consort is an eclectic collection of well-told tales, in which Michel Faber “marches on, establishing himself as one of the most versatile fiction writers working today” (Kirkus Reviews).

“Readers will again be immersed in the intense worlds he creates.” —Publishers Weekly