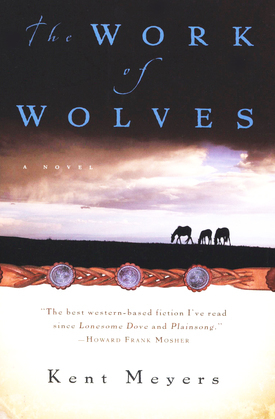 The Work of Wolves

This story of a horse trainer and a rich man’s wife is “a gorgeously written, exacting exploration of duty and retribution set in dusty rural South Dakota” (Publishers Weekly).

When fourteen-year-old Carson Fielding bought his first horse from Magnus Yarborough, it became clear the teenager was a better judge of horses than the rich landowner was of humans. Years later, Carson—now a skilled and respected horse trainer—grudgingly agrees to train Magnus’s horses and teach his wife to ride.

But as Carson becomes disaffected with the power-hungry Magnus, he also grows more and more attracted to the rancher’s wife, and their relationship sets off a violent chain of events that unsettles their quiet town in South Dakota. Thrown into the drama are Earl Walks Alone, a Lakota trying to study his way out of the reservation and into college, and Willi, a German exchange student confronting his family’s troubled history.

Described by Howard Frank Mosher as “the best western-based fiction I’ve read since Lonesome Dove and Plainsong,” this “compelling” story of love and hatred by the author of Twisted Tree offers “fine characterizations, crisp dialogue and fully realized sense of place” (The Denver Post).

“Kent Meyers’s new novel is the kind of book that demands and rewards fierce loyalty. . . . I instantly fell under its spell.” —The Christian Science Monitor