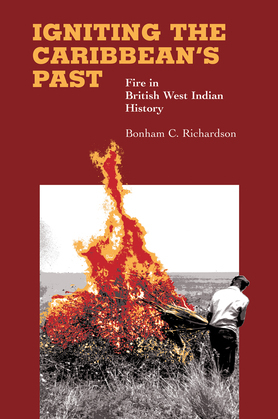 Igniting the Caribbean's Past

Unlike the earthquakes and hurricanes that have influenced Caribbean history, the region's fires have almost always been caused by humans. Geographer Bonham C. Richardson explores the effects of fire in the social and ecological history of the British Lesser Antilles, from the British Virgin Islands south to Trinidad. Focusing on the late nineteenth century, leading to the 1905 withdrawal of British military forces from the region, Richardson shows how fire-lit social upheavals served as forerunners of political independence movements.

Drawing on Caribbean and London archives as well as years of fieldwork, Richardson examines how villagers used, modified, and contemplated fire in part to vent their frustrations with a savage economic depression and social and political inequities imposed from afar. He examines fire in all its forms, from protest torches to sugarcane fires that threatened the islands' economic staple. Richardson illuminates a neglected period in Caribbean history by showing how local uses of fire have been catalysts and even causes of important changes in the region.