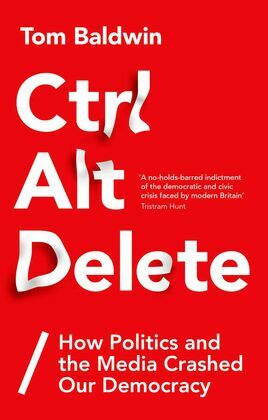 We all know something has gone wrong: people hate politics, loathe the media and are now scared of each other too. Journalist and one-time senior political advisor Tom Baldwin tells the riveting--often terrifying--story of how a tidal wave of information overwhelmed democracy's sandcastle defenses against extremism and falsehood.

Ctrl Alt Delete exposes the struggle for control between a rapacious 24-hour media and terrified politicians that has loosened those leaders' grip on truth as the internet rips the ground out from under them. It explains how dependency on data, algorithms and digital technology brought about the rise of the Alt Right, the Alt Left and a triumphant army of trolls driving people apart. And it warns of the rise of those threatening to delete what remains of democracy: resurgent populists in Westminster, the White House and the Kremlin, but also--just as often--liberals fearful of mob rule.

This is an explosive, brutally honest and sometimes funny account of what we all got wrong, and how to put it right again. It will change the way you look at the world--and especially the everyday technology that crashed our democracy.