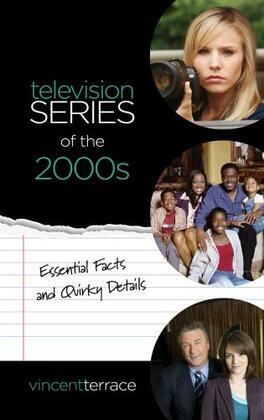 Television Series of the 2000s

In the first decade of the new millennium, the four major networks struggled to hold their own as cable channels and unscripted shows began to dominate the television landscape. Network powerhouses like 24, Desperate Housewives, and Two and a Half Men competed for viewers siphoned off by cult shows like The Closer, Gilmore Girls, and Veronica Mars. In that decade, shows such as 30 Rock and Modern Family were vying for awards while programs like Bones, CSI, and Dexter were pushing the envelope for graphic violence. All of these shows live on in syndication, streaming services, and DVDs, generating a constant wave of new viewers.

In Television Series of the 2000s: Essential Facts and Quirky Details, Vincent Terrace presents readers with a cornucopia of information about fifty programs from the decade. For example, did you know that Adrian Monk’s father was a textbook writer? That psychic Shawn Spencer carries a travel-size packet of Johnson’s Baby Shampoo in his wallet? Or that Gregory House’s street address is the same as the fictional world’s greatest detective, Sherlock Holmes? These are just a handful of hundreds of fun and intriguing specifics found inside this volume. Programs from all of the major networks—as well as select syndicated programs and premium cable channels—are represented here.

This is not a book of opinions or essays about specific television programs but a treasure trove of facts associated with each show. From the time of day that Sheldon Cooper calls his “alone time” to the janitor’s name on Scrubs, readers will discover a wealth of fascinating information that, for the most part, cannot be found elsewhere. In some cases, the factual data detailed herein is the only such documentation that currently exists on shows of the era. Television Series of the 2000s is the ideal reference for fans of this decade and anyone looking to stump even the most knowledgeable trivia expert.