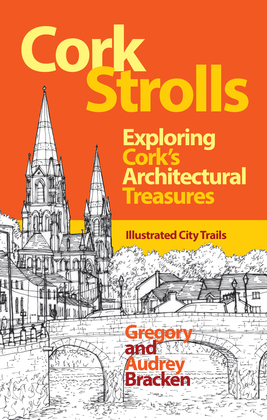 Cork has long been an important hub for international trade, including the lucrative transatlantic routes. This wealth is reflected in the city’s fine architecture, which boasts a wide variety of styles, from Neoclassical to Gothic. Following on from their successful Dublin Strolls, the Brackens guide us on charming walks through Cork’s architecture, sharing expert insights and intriguing historical detail along the way. Striking hand-drawn illustrations capture the beauty of Ireland's second city.

Each of the walks through the city starts where the previous one left off, allowing readers to extend their explorations. They are bookended by landmarks of the city skyline: to the north, the Cathedral of St Mary and St Anne in Shandon and to the west, St Vincent’s Church in Sunday’s Well. In between, they meander through the city, taking in Ireland’s tallest building, the hotel where Michael Collins spent his last night and classic Cork sights such as the English Market, St Fin Barre’s Cathedral, and the old Beamish and Crawford brewery. There are also strolls covering outlying attractions like Fota House and Blarney Castle, as well as the neighbouring seaside towns of Cobh and Kinsale.

This illuminating guide reveals the city and county in a whole new light.