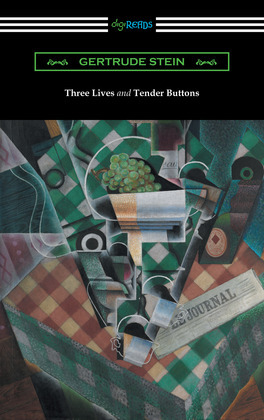 First published in 1909, Gerturde Stein’s “Three Lives” is a series of novellas, three independent stories set in the fictional town of Bridgepoint. The first story, “The Good Anna”, relates the tale of Anna Federner, a servant in the household of Miss Mathilda, who clashes with four unreliable under servants, Lizzie, Molly, Katy, and Sallie. The second story, “Melanctha”, the longest of the three stories, tells the tale of a girl of mixed race who is dissatisfied with her role in the segregated town of Bridgepoint. The third story, “The Gentle Lena”, follows the life and death of the titular Lena, a German girl brought to Bridgepoint by a cousin, beginning with her life as a servant girl, followed by her marriage to Herman Kreder, which ultimately leads to a tragic conclusion. Along with “Three Lives” this volumes includes one of Gertrude Stein’s most famous works, “Tender Buttons”, a 1914 book of modernist poetry consisting of three sections titled “Objects”, “Food”, and “Rooms”.