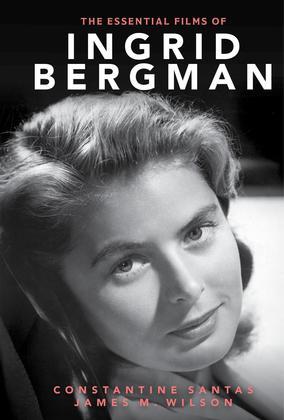 The Essential Films of Ingrid Bergman

Ingrid Bergman was not only an incomparable beauty but one of the finest actresses of cinema’s Golden Age. She made her start in modest productions in Sweden before Hollywood beckoned and soon became one of filmdom’s brightest stars. She appeared in many acclaimed films including as Casablanca, For Whom the Bell Tolls, and Gaslight. While her personal life was briefly tainted by an affair and a consequent falling out with the American public, Bergman was eventually able to return to Hollywood, and eventually earned two of her three Academy Awards.

In The Essential Films of Ingrid Bergman, Constantine Santas and James Wilson look at the most notable performances of the award-winning actress’s career. From her early work in Swedish films to her final role in the mini-series A Woman called Golda, this book analyzes the entirety of Bergman’s on-screen career, paying special attention to those aspects of her acting that made her stand out most—her undeniable range of emotion, her stunning vulnerability, and her indisputable beauty. Among the films discussed in this volume are Casablanca, Gaslight, Spellbound, The Bells of St. Mary’s, Notorious, Indiscreet, and Murder on the Orient Express.

This volume looks at each of Bergman’s most significant films, covering nearly five decades of film making, from Swedish productions to her final films. Each entry provides production history, plot summaries, film highlights, and major award details. Highlighting more than twenty productions, The Essential Films of Ingrid Bergman is a must-have for every fan of the legendary actress.