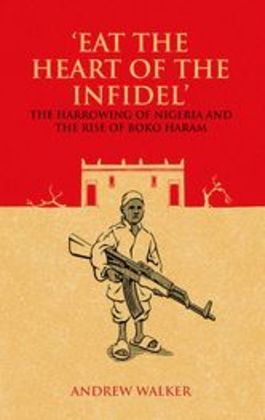 "Eat the Heart of the Infidel"

Boko Haram's appetite for violence and kidnapping women has thrust them to the top of the global news agenda. In a few years they all but severed parts of Nigeria-Africa's most populous state and largest economy-from the hands of the government. When Boko Haram speaks, the world sees a grimacing ranting demagogue who taunts viewers claiming he will 'eat the heart of the infidels' and calling on Nigerians to reject their corrupt democracy and return to a 'pure' form of Islam. Thousands have been slaughtered in their campaign of purification which has evolved through a five-year bloody civil war. Civilians are trapped between the militants and the military and feel preyed upon by both.

Boko Haram did not emerge fully formed. In Northern Nigeria, which has witnessed many caliphates in the past, radical ideas flourish and strange sects are common. For decades, Nigeria's politicians and oligarchs fed on the resources of a state buoyed by oil and turned public institutions into spoons for the pot. When the going was good it didn't matter. But now a new ravenous force threatens Nigeria.