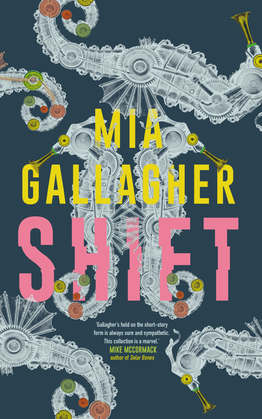 Prowling the streets, bedrooms, parks and schoolyards of a grubby uncertain city, where madness lurks just under the skin, men, women and those in-between enter an unsettling dance of encounters.

There’s Maisie, perfect on the inside and out, a right Primcess™ – but what’s it going to take to get a hard-copy invitation to her party? There’s the angry-deep-inside man, who gets more than he bargained for when he drinks too much at a party, insulting a mysterious guest. There’s those three lads, up from the sticks to study marketing in Belfield, who can’t help listening to the noises in their creaky Georgian house: a slamming door, a washing machine and geisha Susie downstairs, playing ‘Nights in White Satin’ to her snake. And the nixer driving a removals van with Christo, who likes dressing up on days he isn’t feeling too good.

Time passes. Roads get built, cars get faster, bubbles bust. But some things endure. The bitter violence of betrayal. Love, in all its foolish sweetness. The hurt – and sometimes healing – of loss. A magnificent achievement by one of Ireland’s greatest authors.